Australians love to complain about weather forecasts, but compared with some other parts of the world ours are impressively accurate. Our large, mostly flat continent surrounded by oceans makes modelling Australia’s weather and climate relatively straightforward.

The same cannot be said about our neighbours to the north.

For Southeast Asian countries such as Indonesia and Papua New Guinea – which we collectively refer to as the “Maritime Continent” – things are a lot more complicated. With their mountainous terrain and islands of different shapes and sizes, it’s much harder to model the weather and climate of this region.

Read more: The tropics are getting wetter: the reason could be clumpy storms

The models we use to make the most of our climate projections have to simulate the climate for many decades to provide us with useful information. To run such long simulations we have to compromise on resolution; even state-of-the-art global climate models divide the world into grid boxes more than 100km across. The Maritime Continent doesn’t come out too well at these resolutions. 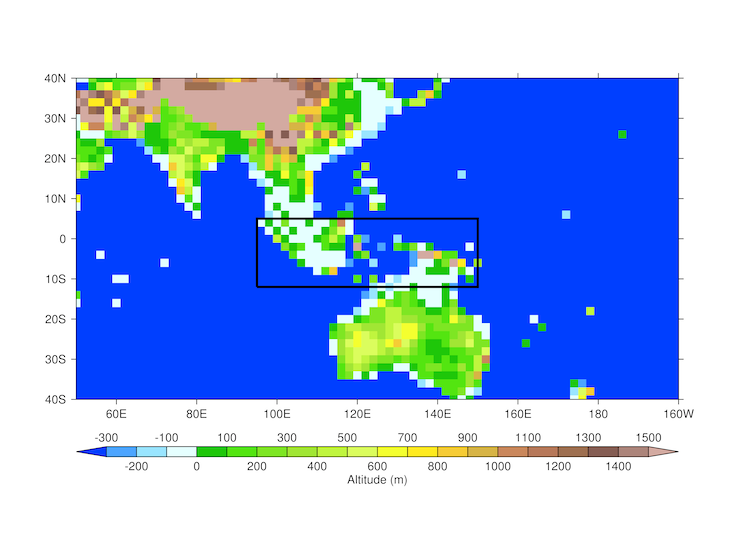 If you squint you can see it! The world’s surface looks a bit like a 1980s video game to a global climate model. The Maritime Continent region (in the black box) is especially messy. Author provided

It’s unfortunate the Maritime Continent’s weather and climate are so tricky to simulate on long time scales. Due to its location right on the Equator and between the Indian and Pacific Oceans, this region has a defining influence on the global climate, being a major source of heat and water vapour to the atmosphere. If we don’t simulate the climate over the Maritime Continent well, we can get errors appearing on the global scale.

Besides that, the Maritime Continent is also home to hundreds of millions of people, and includes major cities such as Jakarta and Singapore. We need our weather and climate models to simulate the processes behind the severe storms, heatwaves, and droughts that these cities and the broader region experience. Accurate weather forecasts, seasonal outlooks and climate projections require models to simulate the atmosphere over the Maritime Continent well.

In our new study, published in Geophysical Research Letters, we show that many state-of-the-art global climate models struggle to simulate the climate of the Maritime Continent. But fortunately, a higher-resolution model captures more of the major processes in this area.

Like in Australia, much of the Maritime Continent region is wetter during La Niña seasons and drier in El Niño, although for some western coasts and Sumatra it’s the other way round. Many global climate models fail to reflect accurately this rainfall response to El Niño and La Niña.

We found that for climate models to do a good job in capturing the year-to-year variability in rainfall over the Maritime Continent, they need to do a few things well. Specifically, they need to represent accurately the amount of moisture held in the atmosphere, as well as the pattern of winds in the region. This gives the right pattern of rainfall response to El Niño and La Niña.

Our higher-resolution regional climate model does a much better job at simulating the Maritime Continent’s rainfall patterns than many of the global models we looked at. As the region has such a complex landscape, global models simply cannot capture enough detail on all the different processes between the land and the ocean, and the coasts and the mountains. But higher-resolution regional models can.

We can capture the processes behind rainfall in the Maritime Continent more realistically when we use a high-resolution model. In particular we can better represent the thunderstorms and heavy rain that tends to occur in the afternoons and evenings in the tropics.

Read more: Australia moves to El Niño alert and the drought is likely to continue

As the Maritime Continent is so important for the global climate but so difficult to model, there is a concerted effort to improve our models and to get more atmospheric observations across the region.

International projects such as the Years of the Maritime Continent are taking place, with millions of dollars and dozens of researchers working on improving our understanding of the region’s weather and climate.

Ultimately, we hope that through better, higher-resolution model simulations, we can capture the processes behind the Maritime Continent’s weather and climate much more accurately. This should lead to better climate projections and seasonal forecasts not only for the region, but for the world as a whole.