Mobility as a Service (MaaS) represents a new way of thinking about about transport. It has the potential to be the most significant innovation in transport since the advent of the automobile.

In a move away from dependence on privately owned cars or multiple transport apps, MaaS combines mobility services from public transport, taxis, car rental and car/bicycle sharing under a single platform that’s accessible from a smart phone. Not only will a MaaS platform plan your journey, it will also allow you to buy tickets from a range of service providers.

While autonomous vehicles have garnered much of the recent media attention on transport, MaaS is gaining ground. A Google search now returns more than 400,000 hits on “mobility as a service”. Many private and public transport providers, along with many state governments, are looking at the impacts of MaaS and how they can capitalise on the idea.

Why the growing interest in MaaS?

In part, the motivation is due to changing demographics. The world continues to urbanise with 55% of the global population living in urban areas today. By 2050, projections suggest that will increase to 68%. This increasing urbanisation will add to existing problems of traffic congestion.

A growing body of evidence suggests that providing more infrastructure won’t solve the problem. It’s too costly and this type of “solution” will provide only temporary relief. MaaS has been promoted as a better way to manage traffic congestion by making more efficient use of existing private and public transport infrastructure.

And MaaS has many other appealing aspects. It could shorten commuting times and make travelling more convenient. It could help shift commuter trips from peak times to low demand times (through demand-responsive pricing of the services).

Finally, MaaS could improve air quality by shifting travellers from cars to more sustainable modes, such as public and active transport, through reward systems. For example, in a trial in Gothenburg, customers were rewarded with points for every ton of CO2 emissions they avoided by using more sustainable travel modes. The points were redeemable for a range of goods and services.

The other motivating factor is the estimated value of the MaaS market. Projections suggest a market worth $US600 billion in the United States, European Union and China by 2025. Others have projected that the global market for MaaS will exceed $US1 trillion by 2030.

UbiGo first trialled MaaS in Gothenburg, Sweden, for six months between November 2013 and April 2014. This involved 83 subscriptions by 195 people.

Most of the customers (80%) wanted to continue after the trial ended. Based on an evaluation of the Gothenburg trial, the following were important considerations for MaaS:

The first commercial application of the concept was by MaaS Global in Helsinki, Finland. The Whim app was launched in 2016. It covers public transport, taxis, car rentals, car-share and bike-share modes. Customers can use the service on a pay-as-you-go plan or by monthly subscription.

Governance the key to scaling up MaaS

MaaS Global is looking to expand elsewhere soon. The key question is whether it can work beyond Helsinki. The challenge is not about the technology — it is about governance.

It’s no coincidence that Whim was born in Finland, a small country with well-functioning institutions and well-designed cities. MaaS will continue to be successful here, in part due to support from the national government.

For example, in 2018 Finland was the first country in the world to create an open market for mobility services. As of January 2018, all mobility partners must provide open data and associated computer programs (APIs) to third parties. 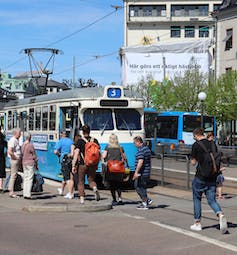 The first trial of MaaS was very popular with users in Gothenburg, Sweden, but a lack of supportive government policies has stalled progress. Michael715/Shutterstock

By contrast, the Gothenburg trial, while successful, has not yet resulted in regular services. Based on learnings from the trial, UbiGo has refined their business model to better integrate public and commercial transport services and will be relaunching in Stockholm with a trial followed by a full roll-out by the end of 2018.

MaaS requires a willingness by private and public transport providers to work with the creators of MaaS platforms. Transport providers must agree to allow the MaaS operator to sell their services and collect a “reasonable” and “fair” commission for each ticket sold.

Another challenge is getting private operators to participate despite losing customers in the short term.

Advocates suggest that, if the concept is successful, the pool of customers will grow as cars are abandoned in favour of MaaS. Hence most companies will want to participate in one or more MaaS platforms.

However, for its potential to be realised, MaaS needs governments to ensure a playing field that is fair for existing and new mobility service providers, and one that encourages cooperation rather than competition. It may be the case that the most efficient MaaS platforms will take the form of regulated monopolies, much like existing utility companies.

Authors: Neil Sipe, Professor of Urban and Regional Planning, The University of Queensland