Many women who experience persistent vaginal itch or discharge assume they have vaginal thrush (vulvolvaginal candidiasis). Treatments for thrush are available without a prescription. Since having a vaginal condition can be embarrassing, it’s sometimes preferable to buy creams or tablets from the chemist and treat yourself.

But this also means some women may be using treatments that aren’t best for their condition, or that could be ineffective. Guidelines on treating vaginal itch, from a campaign to eliminate tests or procedures that could be harmful or ineffective, state:

Do not treat recurrent or persistent symptoms of vulvovaginal candidiasis with topical and oral anti-fungal agents without further clinical and microbiological assessment.

This is because if symptoms of thrush persist despite treatment, you may have an entirely different condition that would not be helped by anti-fungal creams or tablets.

Vaginal thrush is caused by a fungal organism from the Candida family, which usually exists in the vaginal environment (along with a huge number of other micro-organisms) without causing issues for women. When symptoms do occur, they may include itchiness, burning and discomfort, often accompanied by a “cottage-cheese” discharge.

A course of antibiotics (which can alter the balance of micro-organisms in the vagina and allow Candida to thrive) may bring about an episode of thrush. For others, it seems to occur after sexual intercourse. However, vaginal thrush is not considered to be sexually transmitted.

Sometimes thrush occurs during pregnancy. It’s likely hormones play a part in the condition as vaginal thrush is rare in girls before their first period and in women after menopause. Genetics could play a part too, and diet is possibly implicated. But for most women, it’s not clear what causes episodes of thrush.

What is a topical and oral anti-fungal agent?

Health practitioners often recommend anti-fungal treatment for thrush. There are two main types of treatment: oral (tablets taken by mouth) or topical (creams or vaginal pessaries applied directly to the vaginal area). The topical treatment generally works a bit quicker than the oral.

There is no difference in effect between the types of treatments; it comes down to a preference or tolerability. Some women may experience stomach symptoms with the oral tables, for instance. And topical treatments may cause skin irritation for others. But generally both types of treatments are well tolerated. 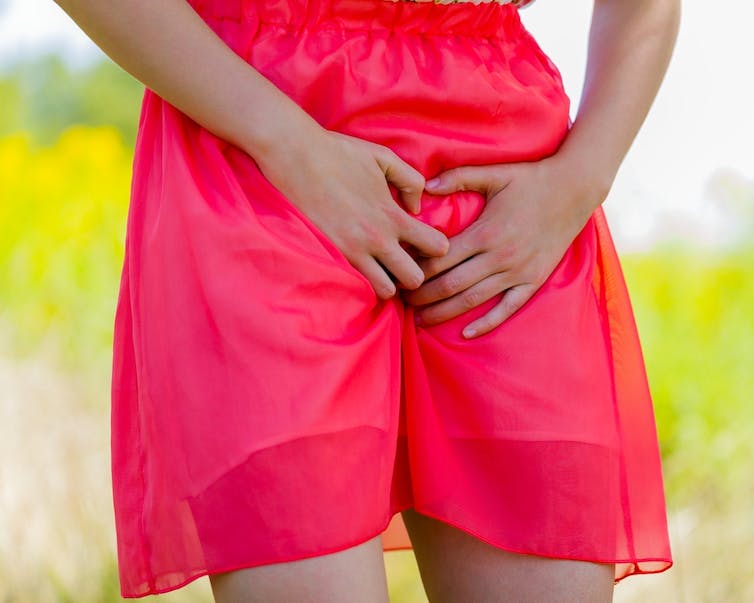 Many assume if a woman is experiencing vaginal itch, thrush is the guilty party. from shutterstock.com

Because thrush is so common, many assume if a woman is experiencing vaginal itch, thrush is the guilty party. Anti-fungal treatments are highly effective if the symptoms are caused by thrush. The trouble is, Candida albicans isn’t the only cause of these symptoms.

One study showed that of women who treated themselves for vaginal thrush, only one-third actually had thrush, and around 14% had no infection at all. The other women had conditions such as bacterial vaginosis which can cause an offensive vaginal discharge and is caused by a bacteria not a fungus.

Read more: We need a cure for bacterial vaginosis, one of the great enigmas in women's health

Some women may also be experiencing a vulval dermatitis, or even a more serious but rare condition called lichen sclerosus, which can cause itching and require completely different treatment.

If a woman uses the anti-fungal treatment and the condition clears up, usually within a few days, it’s likely that Candida albicans were responsible. But if it doesn’t clear up or keeps coming back, it’s important to have this investigated by a health professional.

What if it’s thrush, but the anti-fungals don’t work?

If you have thrush, anti-fungal treatments are usually effective. But for around 5% of women, thrush keeps coming back or doesn’t completely clear despite treatment. In these case, it may be necessary to see a specialist.

The recommended management for problematic thrush is long-term treatment with regular (weekly or monthly) oral or topical anti-fungals. But tailored therapy may sometimes be needed, such as combinations of antifungal therapy (oral + topical) or different regiments according to response to the therapy.

Many women resort to alternative therapies such as tea-tree oil, garlic and gentian violet and yoghurt. But there is inconsistent evidence supporting these methods and they may cause allergic reactions.

Other treatments like probiotics also have limited supporting evidence and can be expensive. There are some promising treatments in the pipeline (such as vaccines, tetrazole antifungal agent and immunotherapy) but these are still under trial and not commercially available.

So, if you’re suffering from a vaginal itching, burning or abnormal discharge that isn’t relieved by oral or topical anti-fungals, seek professional help. You should have swabs taken to rule out other infections or conditions and to decide on the most appropriate method of management.