It’s common practice in the world of gaming for serious video game players to upload videos of their gaming experiences to YouTube, usually for purposes of providing tips to other gamers, walkthroughs and highlights.

Last month, the YouTube channel “Shirrako” uploaded a video capture of a portion of the recently released video game Red Dead Redemption 2 (RDR2). The video depicted an avatar (the figure representing the player in a video game) physically assaulting a female character until she was unconscious. The video was titled: “Beating Up Annoying Feminist”. 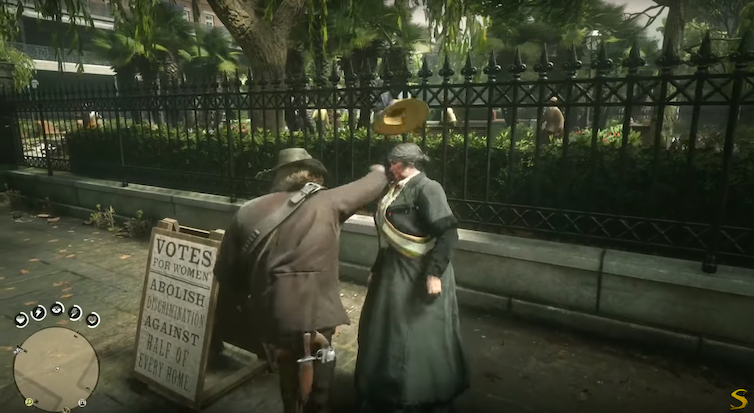 A screen grab from the RDR2 video uploaded to YouTube. Screen Shot on November 16, 2018

Within days, the video had received more than one million views. While some viewers remarked that they planned to replicate the behaviour in the video, others commented:

The only good feminist is a DEAD FEMINIST

Giving women the right to vote was a mistake

Recent research into online gaming in the wake of the #MeToo movement sheds light on this kind of behaviour, raising concerns about the influence of gaming culture on attitudes of sexism and violence against women.

Depictions of violence against women

Following much hype and anticipation, RDR2 – the sequel to the videogame Red Dead Redemption – was released in Australia on October 26, 2018. Across the board, reactions have been glowing, with players posting fantastic reviews.

But video games and their developers have often been criticised for portrayals of violence towards women, and RDR2 is no exception.

The game is set in the US Wild West and gives players the ability to take control and act out violence towards other game characters. This includes physically assaulting and killing the female character, a suffragette, who symbolises the early feminist movement advocating for women’s voting rights.

When gamers upload videos of their gaming experiences, the videos regularly depict inappropriate and socially unacceptable behaviours. That might include beating up sex workers, or assaulting other female game characters.

It’s part of the culture

Such open hostility towards women may be surprising to those who aren’t familiar with gaming culture, but such videos and behaviours are quite common. In fact, Rockstar Games has been criticised in the past for the blatant sexism and stereotypical portrayals of female characters in its games.

Women are often depicted as being weak, submissive and vulnerable to violence from male characters. Such portrayals can shape gamers’ views of stereotypical gender norms, and foster negative attitudes towards victims of violence. Recent research has shown an association between playing violent video games and decreased empathy towards female victims of violence.

Read more: Anger, aggression and violence: it matters that we know the difference

As in previous Rockstar games, RDR2 gives players the option to kill female characters that represent women’s suffrage, without repercussions. So, should Rockstar Games be held accountable for fostering negative attitudes? Should game developers consider implementing a gaming block that prevents players from attacking the female game characters?

These are serious questions worthy of reflection considering the extensive history of game developers creating games that allow for violence against female characters. Particularly when the character is a suffragette, a symbol of women’s fight for equality.

Women and men around the globe are rallying to bring attention to violence against women and girls. The current #MeToo movement has provided a space for personal stories to be shared and heard. But there seems to be resistance to this form of social activism from a select group of men.

A recent study explored tweets posted by men in response to the #MeToo movement that used the hashtag #HowIWillChange. According to the researchers:

…#HowIWillChange was intended to engage men and boys in the ongoing discussion about sexual violence by asking them to evaluate their role in sustaining rape culture.

Among the tweets, researchers observed the expression of sexist attitudes, a hostile resistance to social change, and a desire to maintain current gender power structures.

Hegemonic masculinity, which is the process by which certain masculine traits are positioned in society, serves to maintain patriarchal power structures and justifies the subordination of women. Toxic masculinity is considered to be a form of hegemonic masculinity. It promotes aggression, competitiveness and domination.

Consequently, behaviours of gamers and their comments towards female characters should be taken seriously. They highlight concerning attitudes and beliefs about gendered violence, which are further amplified when pushed out to an anonymous public forum, such as YouTube or social media.

Read more: There are no age restrictions for gambling in video games, despite potential risks to children

Anonymity has been found to be an influential factor when it comes to negative online behaviours. It allows individuals to freely exhibit inappropriate and socially unacceptable attitudes towards women.

And the power to openly encourage such behaviours anonymously via YouTube comments means people can share their hatred towards women and the feminist movements, without offline repercussions.

These behaviours paint a dark picture in the current quest for gender equality.

RDR2 is, therefore, not “just” a game, it’s a reflection on outdated sexist behaviours and attitudes that need to change. Now it is time to start an important dialogue about why there are some individuals who feel the need to depict such violence toward women, and why others accept these acts of violence towards women as normal.